Questions to Ask Before Passing a Car Down to Your Child 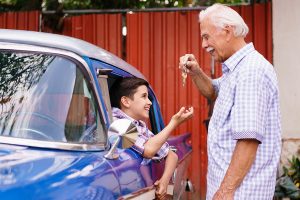 Your teenager just got his or her driver’s license and is begging you for a car. You’ve been thinking about buying a new one anyway, so you decide to give him your current ride. After all, an older vehicle should cost him less to insure as well as repair if he gets in an accident. Problem solved, right? Not so fast.

While hand-me-down cars can be money-savers, they also have potential drawbacks. One study conducted by the Insurance Institute for Highway Safety found that 48 percent of drivers between the ages of 15 and 17 who died in crashes from 2008 to 2012 were in cars that were at least 11 years old. Before you gift an older car to your child, ask the following questions.

Older cars may lack the safety features available on new models. While front-collision air bags have been required on all cars produced since 1998, electronic stability control didn’t become standard until 2012. Side-curtain air bags—which can be lifesavers in rollover crashes—are fairly rare even in cars purchased this decade.

Review the owner’s manual to determine the car’s safety features. You may want to check out crash-test ratings as well. You can find many on the Insurance Institute of Highway Safety website.

While the aforementioned study found that 29 percent of the fatally-injured teenagers had been driving a small car—and 35 percent operating mid-size vehicles—bigger isn’t necessarily better. In fact, handing down a car that your teen has already been driving regularly is a more important consideration than size.

For example, if your daughter is used to driving a small car and you give her your large SUV because you think it will be safer on icy roads, you could actually be setting her up for an accident due to the difference in blind spots and turning ratios. On the other hand, a teen who learned to drive in a large car may not be able to do so as safely in a compact vehicle.

If you’ve been diligent about maintenance, you’re probably confident in your car’s condition. However, it makes sense to have a mechanic look it over before you hand it down to your child. A review of the vehicle’s systems will cost you, but that’s a small price to pay for the peace of mind you can have knowing your teen won’t be stranded due to engine trouble.

Teenagers pay some of the highest insurance premiums due to their minimal driving experience. Certain cars—such as those that are more valuable or are expensive to repair—will bump the price of their auto insurance up even more. Ask your insurance agent for a quote on the hand-me-down make and model.

Is your teen about to become a licensed driver? Contact us today to discuss adding him or her to your insurance policy or to explore other car insurance options.